There is a grassland – not quite a prairie, nor quite a savanna, where shaggy beasts graze under a wide sky. There was a river across the land once; now there is only a stream in a wide bed. There was a smooth highway of pale stone; now if you skip, you can travel by jumping long jumps from one gently slanted stone to another. Where the river met the highway on this grassland, there was a great city called Sargolis. Under Sargolis, there lie caverns, where ten thousand generations of bats left their droppings, where fungus grew in near-forests. Here many of the people of Sargolis toiled, once, bringing these things to light and market, and creating a great bustle of trade. The finest merchants of this trade became the nobles of Sargolis, and sneered down at the workers of the deep caverns, the delvers of the deeps, risible figures on the stage and ones to be avoided in the street. Under the regimes fostered by this division, it should be no wonder that the delvers came to be driven to overwork, that the deeps were neglected, that monstrous rats were let to breed in their corners, that cults grew up in the deeps, until eventually they began to raise the dead in the dark below. Mighty Sargolis was raided, again and again, by the dead and the cults beneath it, and went to war against itself – and both sides lost. The wealthy fled or were cut down, the warriors died in hosts, until the fighting stilled.

They say a potent lich still lurks in the deeps, much-depleted from the war, and coming no more to raid, likely rebuilding its strength. Certainly where the dead are not burned, they rise as undead, and go below, and all manner of vermin make their way to city to breed under it. The armies are gone. But the deeps remain, and someone still has to finish the job.

Sargolis is an Adventure RPG, using only six-sided dice.

The game takes its mechanical cues from Tunnel Goons by Highland Paranormal Society (on which it is based), from Darkest Dungeons (stress and breakdowns limit your exploration of procedurally-generated depths), and from the Roleplay Book of Warhammer Quest (the world above as time management and places to visit until town becomes untenable).

It is quick to play, and easy to make characters for.  It's also made heavily out of parts you can steal and take elsewhere if you feel the urge to do so. 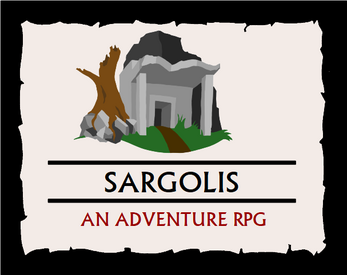