Schema Is Available In Print On Drivethru RPG; Click Here For That.

Schema is a light engine for tabletop roleplaying with complex stakes.

Breaking that down - It is an engine, rather than a game, because assembly is required - you'll need to provide a setting and do a bit of configuring before it's ready to go.  It's an engine with complex stakes - the kind of thing you might see in a Powered by the Apocalypse game, but built on the fly with a "stakes sheet" in the center of the table: 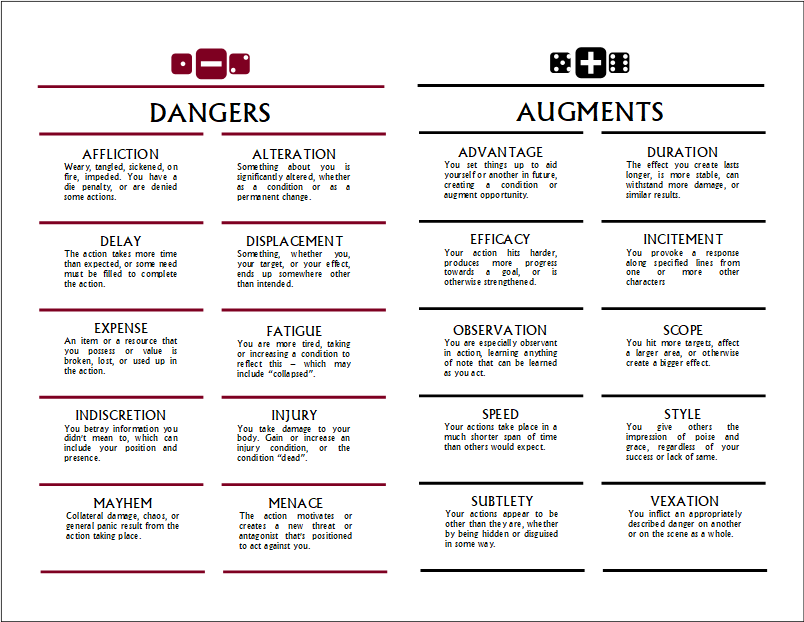 When you want this engine powering your game:

If you expect your game to have moments where there's plenty going on, where there are three different things going on to worry about and two different awesome things the character could be doing, and you don't feel like sitting there for ten minutes making a roll for each single thing... That's the ideal moment to be using Schema, because it is better at handling that than any other system.

If you'd like to see characters needing to pick in the heat of the moment between bringing down the house or feeling sure they're going to come out in one piece... and if "Are you more okay with collateral damage on this one, or more okay with getting knocked off the roof and the bad guy getting away?" strikes you as a fun thing to happen in a roll, then you should use Schema.

If you want to characters to feel like they're patiently slogging it out when they're keeping their heads down, and throwing it all to the wind when they really care about what there is to gain, you want Schema.

Just got this as part of the bundle, like everyone else. It looks very cool and I'm looking forward to trying it out. Obviously the stakes system is the most exciting thing, but I also like the idea of rewarding players for playing off each others' cues.

A few notes and questions on the document itself, if you don't mind:

1. In some of the examples (e.g. "Rat Things" and "Hive Priests"), you talk about characters getting an extra die for being "well-equipped". However, that rule doesn't actually appear in the "Making A Roll" section. How exactly does it work, or is it an older rule that was supposed to be deleted?

2. You sometimes talk about "skills" that divide into "specializations", and sometimes talk about "fields" that divide into "skills". Is there a three-tiered hierarchy going on here (field-skill-specialization), or is one of those terminologies a holdover from an earlier edition? (See e.g. the text above the character sheet on Page 5, compared to the character sheet itself.)

3. This is more a matter of taste, but I found the descriptions of many of the backgrounds difficult to understand until I'd read the "Making A Roll" section (e.g. "you may invoke this trait to play style"). Similarly, the discussion on "Gear Conditions" comes before an explanation of Conditions in general. I personally would have found the document easier if the more general rules were explained first.

4. Is there a sample one-shot I could use to try this out with my group? I don't want to dive straight into a full campaign with an unfamiliar system.

1. This is terminology from a holdover, and is just dice from having applicable equipment as a condition.

2. Same again; there are just two tiers, the granular score and the have-it-or-not bit.  The clearest terminology, in tests, has turned out to be the D&Dism of "ability score" and "proficiency", which annoys me, but clear is clear.

3. Fair, that.  I've had readers go both ways on that, (your way and the reverse, where envisioning the general rules is hard without knowing character bits).

4. Not *exactly,* but if you click over to my storefront, there are a few free games in various states that use forms of the general engine, some of which demand a lot less 'co-designer' work (Infected is pretty close to 'just make characters and go').

Just spent a day reading the Infected document cover-to-cover instead of doing my coursework, and it is now the #1 candidate for my next campaign. Thank you so much!

I do notice that there are a lot Schema 7 features it doesn't use (luck points, cues, skill specialization, and conditions). Any advice on incorporating them, or would that be a bad idea?

Also, I have a list of about 75 copyediting notes on the Infected document itself, the most significant of which is that the automatic stake for the Shoot action is accidentally copy-pasted from the Surgery section. They're not directly relevant to this page, but if you're planning on updating Infected at some point then I can email them to you.

I'd love 'em.  levi.kornelsen@gmail.com, if you would!

And yeah, Infected is much older than Schema 7.  I would *not* try to import conditions to it without a total overhaul, but cues, man...   Whooo, I'd want to bring those.  Luck, could go either way.

As suggested, I tried out the system with an Infected one-shot. Since Infected uses an earlier iteration of the engine, I wanted to backport some of the features. Conditions I left out by your suggestion, but each PC got two cues, and luck points were included so that cues could have some mechanical teeth.

Bottom line: everyone at the table (most of whom have been RPing for a few years, across more than one system) were pretty pleased with the engine.

The stakes system means almost every roll comes with interesting choices even after the dice have hit the table  - and also before, if the player gets to decide whether they're being Bold or Cautious, which I tended to allow.

Cues fix a central problem we've had with Fate character aspects, which is that the GM has to memorize about 20 aspects in order for them to be relevant. Moving that responsibility to the players helps distribute the load, and also makes players pay attention to each others' characters, which is great.

However, while Schema seems great in general, I don't actually think Infected was a good choice to showcase it. I'm still excited to use Infected in a campaign, but in a one-shot it didn't really shine. This seemed to be for three reasons.

Firstly, a lot of the mechanics of Infected are about resource management, which on the scale of in-universe time covered was not really an issue, leading to a lot of bookkeeping that ultimately amounted to nothing.

Secondly, a lot of the fun of post-apocalyptic games is in rebuilding from the ashes: founding or finding an enclave of survivors and helping them achieve stability.

Thirdly, a big part of the appeal of Infected (to me) is in the gradual development of the setting as the apocalypse progresses, with things getting weirder, more exotic monsters surfacing and the nature of the Roil, the Makers, Nocturne and so on being explored by players and characters alike.

In a three-hour one-shot (plus one hour for character creation), there wasn't enough time to do justice to any of that. People had fun, but it didn't feel like a complete experience.

But like I said, the engine itself made a good impression. I'm now working on another one-shot, with full Iteration 7 features. I'll let you know how it goes.

You're too kind, but I think it's mostly redundant now that itch.io let you search within the bundle (and credit where it's due, it only took them about a day).

Also note that it's now out of date, as the bundle grew quite a bit.

And to answer your question, I scraped the bundle pages using a Python script. I think I've still got it - I can send it to you if you'd like.

Ayyy fancy finding you here after all this time! It's Tarrant!

I still have the cards printed out from the last iteration, looks like I can still use them here! But I see you've made the skills a lot more granular than the last time - something I was hacking together before but looks to be much more refined than me overlaying schema over Cthulhutech.

Conditions and Clusters sound quite cool; granular and fluffy!

I'll certainly see if anybody wants to try it out, I've got some homebrew settings begging to be run in it.

If you Twitter, that's my main place lately: @levikornelsen

This seems like a pretty neat resource to have at hand.

Can it also be used for commercial use? (As in, charging for an RPG that was built using this engine.)

Absolutely, yes; if someone wants to write a game on my rules, they can publish away.

I am very glad to see that you have Schema under development and I gladly paid the few dollars for the new one here at itch.io, even if had the old one in my drivethrurpg library. I was going to ask a bunch of questions, but you already handled them when alpha turned into beta (for example I  was interested in exp system).

Now, I do have a few things I would like to ask. Here they are:

1. Are you planning on making an example or two about the cues? I *think* that I got it, but I would like to make sure of it through examples

2. Have you playtested yet the skill/field combination? I currently feel that The broader fields would be easier to see with a quick glance on the sheet, and then check which specific skills get the full amount of bonus dice. Have not tested it in a game yet though.

3. You propose using troubles in conditions that reach the cap, which is 3 at the moment. Still it seems that when you talk about conditions relating to health/permission to stay active in the scene like "hurt" or "injured" the first condition does not seem to get a trouble, even when taken all the way to 3.

Is this intentional, if so why? To me it would feel intuitive, if the penalty currently attributed to the second similar condition (for example taking injured after taking hurt 3) would rather be included to getting Hurt 3. That way all the conditions work in similar manner.

All in all, I like this game engine very much, hopefully these comments are something helpful rather than hindering.

2) I have, but not with that specific wording and layout.  I feel like an adjustment to the character sheet to link up skills in the same field might be called for, or similar.

3) That's....  Actually, looking at it, I need to clarify.  In my head and play, the concept is that *standalone* conditions generally pick up trouble at three, while clustered ones tend to pick it up as you go from one condition to the next (though neither is a fixed rule).

Thank you for the reply. I got one more question:

You propose in the rules that negative conditions are used to add dangers to a roll, up to the level of the condition (which is capped at three). Has this caused a death spiral or similar in situations where multiple rolls might be used in the same scene, like combat in most systems?

Like the example of the rat things in the sewers, where the character takes Hurt 2 and Red fever 1. The character would be up to 1-2 extra dangers per next rolls, depending on if Hurt 2 is meant for that rule or not. Thus same kind of a roll a while later would have 4-5 dangers, which feels... well, dangerous 😁.

I have understood from the way you write things, that these rules are a bit like modules the GM can use or not, depending on the style of the game, but trying to get more insight.

By the way, is this the channel you want to get feedback? Would email be more suitable? 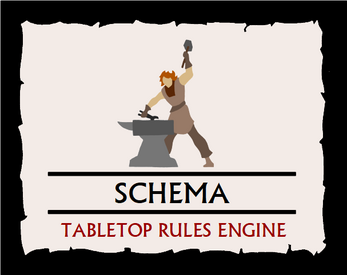